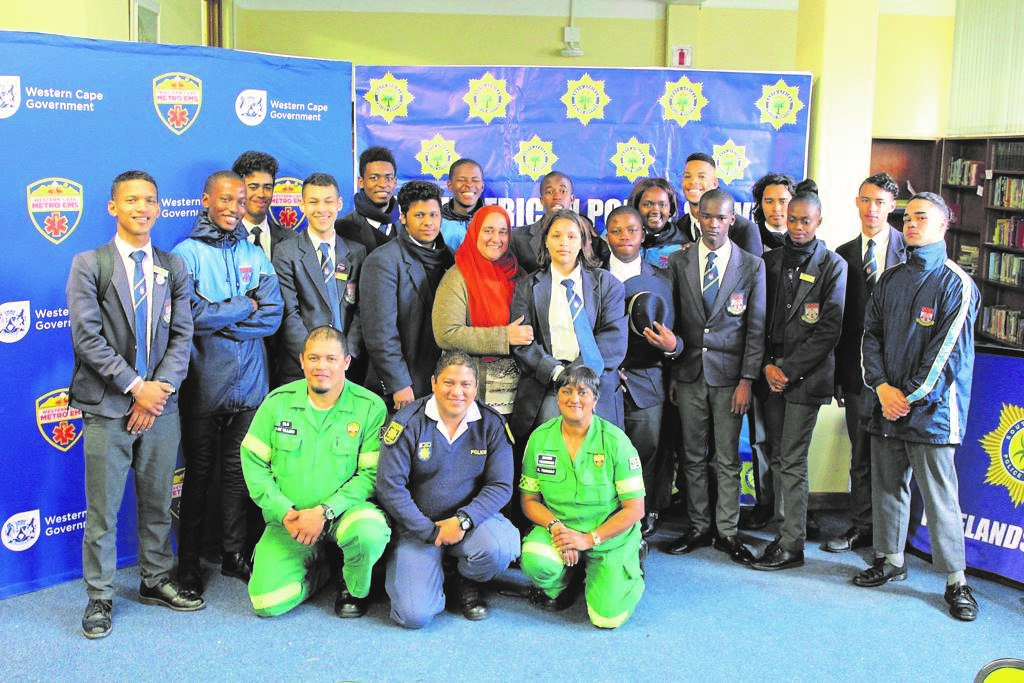 The 1977 hit of the Bee Gees wouldn’t be one’s first guess if asked what music a group of Grade 12s would be listening to but that was the song blaring out in Oude Molen Technical High School’s library last week.

It turns out that “Stayin’ Alive” has the perfect beat for administering cardiopulmonary resuscitation (CPR) and is the obvious soundtrack choice when teaching learners this life-saving technique.

The first-aid training forms part of a pilot anti-bullying programme being held at the Pinelands school.

A Pinelands police initiative, the project was launched at the beginning of this year in partnership with Metro Emergency Medical Services (EMS), Victim Support and the Western Cape Department of Education. Building better relationships

Constable Quinton George, a driving force behind the initiative, explains: “The programme aims to empower youth and to build better relationships between communities and emergency response units.”

In the first term, K9 searches of the premises and research were done to determine the exact safety needs at Oude Molen Technical High School.

The Victim Outreach department introduced its services to the learners in the second term.

The Narcotics department will visit the school in September and next term the Film and Publication Board (FPB) will focus on the dangers of cyberbullying.

The first-aid training was started in the first week of August. Grades 8 to 11 learners will undergo the hands-only CPR training while Grade 12 learners will receive the Emergency First Aid Responder Training (EFAR). On completion of the course, Grade 12s will be issued with a credit certificate which is valid for two years.

“An EFAR course usually costs about R1 500 to R2 000 but it is offered for free because we are passionate about empowering our youth. This also gives them something to put on their CV when they apply for enrolment at tertiary institutions or for jobs next year,” says George.

Taught to make a difference

Estelle Thomas was instrumental in getting the project off the ground.

She is a qualified rescue technician and a lecturer at Western Cape Government EMS College, focused on staff development at the Pinelands base.

“I’ve been trying to set up a programme like this since 2016. I am passionate about giving back to the community. That is why I became a medical/rescue responder in the first place.”

Thomas (50) says she sees this project as her legacy and she would like to see it well established before she retires.

“Yes, we teach learners about first-aid, but they also learn a much more valuable lesson. We teach them that they matter; that they can make a difference; that they can save a life.”

She says programmes like these can help learners realise there is more to life than the crime and hardships they are confronted with every day.

“They may not think so, but they have the world at their feet. If they work hard and do well at school they can achieve so much,” she says.

Besides boosting learners’ self-confidence and sense of self-worth, the training also teaches learners the value of life, says Adiel de Villiers, a basic life support logistics officer who gives of his own free time to assist with the training.

“I grew up in the Cape Flats. I saw all these things some kids experience daily. Training like this shows them they can play a big role in their communities. Even if they only phone for an ambulance, they can give someone the hope to survive.”

Response from teachers and learners at Oude Molen Technical High School has been very positive.

Principal Fatima Khan says she was very excited when Pinelands police and Metro EMS asked if they could hold first-aid training courses at the school.\

“I thought it would be a wonderful opportunity. Especially for our Grade 12’s. The learners are happy with what they have learnt and they are impressed with what they now know they can do.

“We have also received a long-term commitment from them. This year’s Grade 11s will receive the EFAR training next year, and so on. Thomas said she would do this until she retires, and by the looks of her, seeing her energy, I don’t think that will be anytime soon,” says Khan.

‘It changed my perspective’

One of the matrics, Grade 12DC class captain Saadiq Sanders attended the training and says it left him feeling more confident.

“This has been a positive experience for me. I’ve learnt so much. It also changed my perspective of the police and ambulance drivers. People sometimes complain that it takes up to an hour for police or an ambulance to respond to a call. But now that I know some of the challenges they face – staff shortages, multiple call-outs at the same time – I realise that they are human too.”